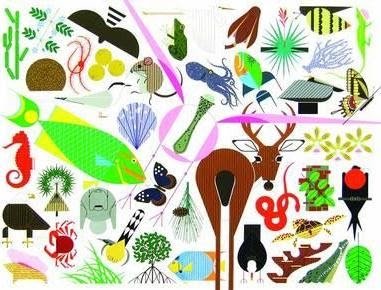 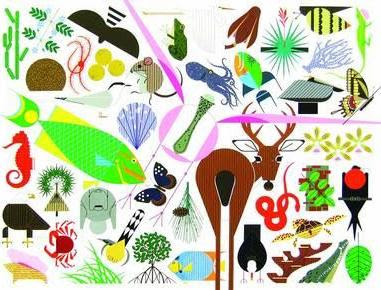 Charley Harper is a mid-century artist who long ago captured my heart. His work is beyond iconic, exquisite and way ahead of its time, with graphic design-style illustrations that are both pure simplicity and intricate detail. Using elements like line and pattern to bring richness to shapes filled with predominantly flat colour, Harper’s illustrations are both modern and retro, stylised and classic.

There is simply no one like him (though many have been inspired, including yours truly). I’m so enamoured, I have most of his books, and Animal Kingdom is without doubt one of my faves.

This particular creation was worked on by noted designer Todd Oldham, and is a true homage to Harper’s life and legacy, beginning with a six-year-old Oldham utterly mesmerised by one of Harper’s early books, The Golden Book of Biology. In 2002, Oldham visited Harper in his Cincinnati studio and was blown away by his astonishing body of work, mainly serigraphs (screen printing) with bold, luminous colour and eye-catching contrast.

Oldham was so impressed with Harper’s work, he felt compelled to compile a monograph to celebrate the artist’s life, and spent five years working with Harper on Charley Harper, An Illustrated Life which was published in 2007. This was followed by Animal Kingdom in 2015.

This tome is a true smorgasbord of Harper’s faunal studies. A whopping 288 pages are punched with a range of stunning artworks, with a foreword by Oldham sprinkled through the fore pages, discussing the artist’s history and processes.

Spreads are superbly designed, using plenty of white space and artful placement of images according to their content. The layout rests the eye and provides perfect pause before the next page-turn and subsequent visual surprise – each one is like that first spoonful of the most decadent ice cream sundae.

Although this is considered an ‘adult’ book, the content would enchant children of all ages, even babies, who would be agog at the masterful shapes, colours and contrast. The bulk of the book is text-free, and imagery is ripe for not only self-story creation, but for honing a true appreciation of form, layout and design. I can imagine even the smallest children finding familiar animals presented in a way that will stretch and delight little minds.

I adore this book – it’s one of my great treasures. The imagery will never date and I’ll never tire of seeing Harper’s astonishing creativity come to life.

When it came to constructing his imagery, Harper said:

‘When I look at a wildlife or nature subject, I don’t see feathers, fur, scapulars or tail coverts—none of that. I see exciting shapes, color combinations, patterns, textures, fascinating behaviour and endless possibilities for making interesting pictures. I regard the picture as an ecosystem in which all the elements are interrelated, interdependent, perfectly balanced, without trimming or unutilized parts; and herein lies the lure of painting: In a world of chaos, the picture is one small rectangle in which the artist can create an ordered universe.’

Oh to have the mind and talent of Charley Harper.

A note that this edition seems to be out of print, though you may find it second-hand. Another option is to order directly from the artist’s website and have it shipped from the States (worth it!).
Learn more about Harper on the dedicated website.