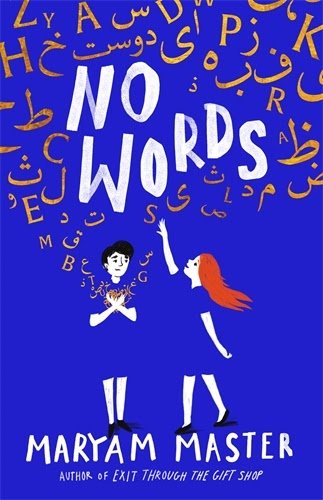 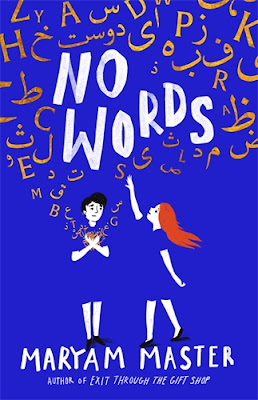 From
the author who gave us the heart-jolting, Exit
Through The Gift Shop, comes another show-stopping middle grade
drama.
No
Words pulls no punches telling the story of 12-year-old refugee,
Aria and moves with the same tumultuous pace as Master’s former
novel.

Don’t
equate the tempo of this narrative with a rushed outcome however because Aria’s
tale is told with measured sensitivity and precision. It just happens to be in
the same voice as your typical upper primary school kid with as much energetic
beat and bounce. Which is ironic when the story centres around Aria’s distinct lack of
voice.

Aria
hails from old Iran, Persia having fled his country with his older brother and
father. There was no time for goodbyes. No time to mourn the loss of his
beloved mother. No time to digest the horror of their situation. We learn
through the broken recall of Aria that his mother was persecuted for her
liberated feminist beliefs. But that is not the main thrust of this story.

Hero
and her whacky bestie, Jaz are driven by their sense of justice to stick up for
the little guy. When wordless Aria turns out to be that little guy, they feel
compelled to help but the school’s apex bully, Rufus the Doofus, is too
daunting to face down. Doofus and his goon squad pick on Aria with voracious
relentlessness rendering Hero and Jaz as speechless as Aria. If courage is one
of the characteristics of being a hero, then Hero feels she is letting Aria’s
side down big time.

Despite
this failing, both she and Jaz befriend the mute boy, eventually drawing him
and his family into their domestic circles and thus, inching ever closer to
disclosing the mystery of his missing voice. But bullying and schoolyard
friendships are not the main elements of this story either. Neither is the
delicate deference paid to Hero’s dad who is in a parallel battle of his own
thanks to the ups and downs of his mental disorder.

The
theme of No Words,
if there must be one, is in fact so cleverly nuanced that none of the issues
touched on overshadows another. Forced immigration, women’s rights, humanity,
bravery, friendship, and tolerance all get a nod in such a way that kid readers
will organically grasp because of the incredible array of emotions used to
portray them. Belly shaking humour (thanks Jaz) sits comfortably alongside
terrible grief. Anxiety in a variety of forms blossoms frequently but is
sheared back with heart-warming compassion and kindness. And dread is smothered
by absolute awe when Aria’s true voice finally resounds, loud and true and
sure.

This
is a story about finding the words, your words, and the courage to
speak them. It is a story about storytelling and the power of words whether
whispered, shouted or merely thought and their importance in preserving that
most significant and mighty word of all. Love.

It is
a tale that has made me fall in love with Maryam Master’s gift
of storytelling just a little bit more and one I am sure primary schoolers will
savour with full and eager hearts because she speaks their speak so
indescribably well. Older tween and teen reluctant readers will also be
comfortable reading this for the same reason. Bravo!

This review first appeared on Dim’s Write Stuff as a DIM’SreVIEWS review.

PrevPrevious PostSanctuary for the Abused: Disabled Women & Abuse
Next PostPlaying the Victim as a Means of ControlNext