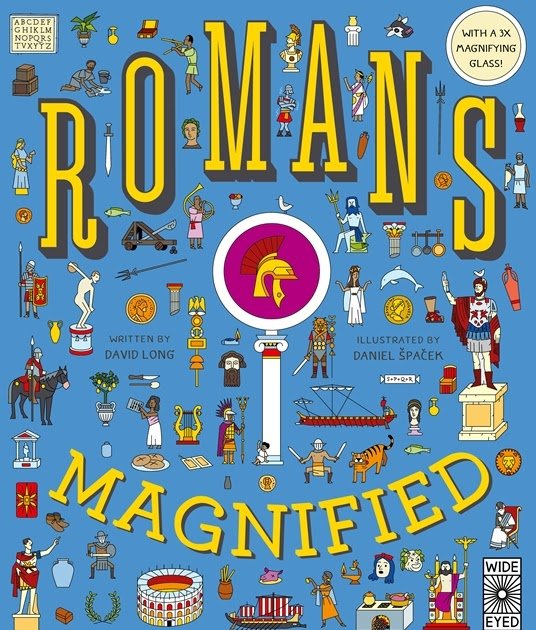 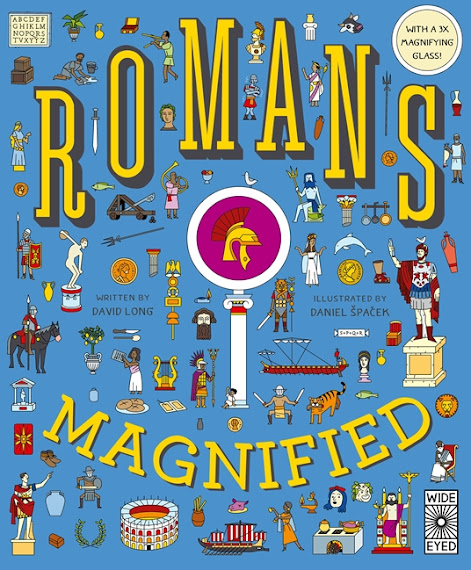 Romans Magnified is a terrific book for kids, and an especially great choice if they have an interest in history, love reading Asterix, or enjoy interactive books like Where’s Wally?.

The book can be experienced in a couple of different ways. There’s text to read which provides an introduction to different aspects of life in Ancient Rome.

It starts with explaining what the Roman Empire was, and works through topics like the emperor and senate, public baths, Roman army, reading and writing, roads, Roman markets, family life, and lots more.
There’s also a page on archaeology and how we learn from the past through the discovery of ancient objects and exploring the ruins of ancient cities like Pompeii.

Importantly, there are detailed pictures to look at. They are intricate and colourful, full of the activity of life in ancient Rome. To help look closely, a magnifying glass is included embedded inside the book’s front cover.

Each double page spread has a list of ten things to spot, and at the end of the book there is another list of things to find on the same pages, which will test readers to see if they can remember where to find them. Plus each picture has a mouse and a heart hidden somewhere. Altogether there are more than 200 things to find throughout the book!

A ‘gallery’ of famous ancient Romans includes people like slave and gladiator Spartacus, Fulvia who was the ‘first living woman to have her face on a Roman coin’, and several Roman emperors.

A brief timeline summarises key events in ancient Rome, starting with the founding of the city of Rome in 753 BC, and ending with the reign of the ‘last western Roman emperor, a teenager called Romulus Augustus’. A glossary is also available to look up some of the words used in the book, and some of the Roman numerals.

Romans Magnified will draw children in and entertain them, keeping them busy while also increasing their knowledge of ancient history.