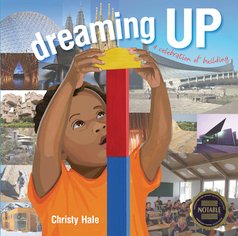 “Creativity is just connecting things. When you ask creative people how they did something, they feel a little guilty because they didn’t really do it, they just saw something.” —Steve Jobs

Everything reminds me of something else. This was how the idea for my 2012 book Dreaming Up: A Celebration of Building began. The exuberant turrets of La Sagrada Família in Barcelona made me think of a dripping sandcastle, the graduating concentric circles of the Guggenheim Museum evoked stacking rings, and the jutting horizontal balconies of Fallingwater reminded me of a wooden block structure. Three’s a charm, right? I persisted, looking for connections between children’s building play and architecture. I found fifteen pairings, enough for a book.

The setup shows an illustration of children building and a photograph of a related structure on the opposite page. Concrete poetry reinforces the building shapes.

My criteria for selections: I wanted to make strong visual connections, I wanted to highlight modern architecture from all around the world, and I wanted to showcase diverse architects. In the back matter you can learn more about each structure and architect.

My new book, Copycat: Nature-Inspired Design Around the World introduces readers to ways that nature has sparked human creativity and innovation. The book follows the same format as Dreaming Up, with an illustration of something from nature facing a photograph of the invention it inspired. A tanka reinforces the connection.

I brought the same criteria for my selections in this companion work: I wanted strong visual connections; I wanted examples of designs from all around the world; and I wanted to feature diverse inventors. In the back matter you can learn more about characteristics of each item from the natural world as well as more about each invention.

Neuroscientists studying creative thinking have identified three networks of connections in the brain. The first relates to play, daydreaming, and spontaneity. The second relates to focused attention and control. The third is a toggle between those opposites, allowing creators to both generate ideas and evaluate them. “Highly creative people have significantly more nerve connections between the right and left hemispheres.

As a child, architect Frank Lloyd Wright spent hours playing with his wooden blocks, developing the strong sense of geometry that became a hallmark of his design. In his later years Wright claimed, “The maple wood blocks are in my fingers to this day.”

Eiji Nakatsu may have been daydreaming as he observed nature. Studies of creative thinking show the importance of having wide interests. He brought not only his knowledge as an engineer to the problem of the noisy Japanese bullet train, but also his experiences as a birdwatcher. He observed kingfishers diving for prey, their tapering beaks allowing them to transition smoothly from air to water—no splash, no sound! Nakatsu redesigned the nose of the train to mimic the bird’s streamlined beak and the trains ran faster, more quietly, and used less energy.

Young builders, architects, designers, engineers, inventors, and scientists are all making connections. You can help develop a new generation of creators and problem-solvers by allowing for play and time immersed in nature.

Praise for Copycat: Nature-Inspired Design Around the World:

★”A fascinating and creative look at a little-known STEM topic that is accessible to a wide audience. Highly recommended.” —School Library Journal

“Inspiring, lovely to look at, and well presented.” —Kirkus Reviews

Christy Hale has illustrated numerous award-winning books for children, including Dreaming Up: A Celebration of Building and several other titles for Lee & Low Books. As an educator, Hale currently teaches picture book writing at the Academy of Art University in San Francisco. She has also taught art and graphic design to high school students. Hale and her husband live in Palo Alto, California. You can visit her online at christyhale.com. Photo credit: Jenna Cole.