New Release: When You Get to the Other Side 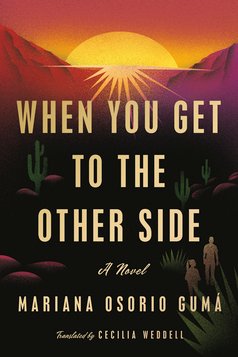 Happy release day to When You Get to the Other Side by Mariana Osorio Gumá, translated by Cecilia Weddell! When You Get to the Other Side is a powerful text that covers and crosses all boundaries between reality and the supernatural, between origin and destiny, paths that cross, and ones that reveal how deep the roots that live within us are. Cecilia Weddell’s translation of the novel skillfully captures Osorio Gumá’s powerful, poignant look at the nature of borders, what it means to cross them, and the changes people undergo when they travel between two worlds.

The morning they left Amatlán in the bed of a pickup truck, in the hours between darkness and daybreak, the world became immense and noisy. Emilia Ventura shut her eyes and inhaled deeply, bringing in the fresh air of her homeland. She wanted to hold onto it. Let it go down into the depths of her soul, wrapped securely in the mist of daybreak.

Twelve-year-old Emilia and fifteen-year-old Gregorio spend their childhood following their tenacious grandmother, Mamá Lochi, through the oak- and jocote-filled mountains of Amatlán, México–gathering herbs for the folk remedies Mamá Lochi makes, listening to her awe-inspiring stories about becoming a curandera, and learning how to connect with the supernatural world themselves. But, when she passes away they’re left alone, with their father hundreds of miles north in the U.S. So they scrape together all their money, and pay coyotes to smuggle them to the other side.

The siblings are exhausted and famished before they even make it to the border, and they fall into only more danger after crossing. After the predatory coyotes separate Emilia from Gregorio–having their own plans for the young girl–the siblings struggle through the parching desert, and a human trafficking operation hidden within it, to make their way back to each other. They draw strength from their profound bond as well as the supernatural abilities their grandmother helped them hone, such as catching glimpses of the future and hiding to the point of invisibility. Their efforts are interwoven with flashbacks to Mamá Lochi herself, whose tales of the mystical journey she took to become a curandera teaches the siblings how insubstantial and blurred the imagined borders between past and future, self and other, and life and death truly are–preparing them, as much as anything could, to experience all these spaces on their own journey.

Order your copy of When You Get to the Other Side:
IndieBound
Bookshop
Barnes & Noble
Amazon

or through your favorite Latinx-owned bookshop!

Mariana Osorio Gumá is a psychoanalyst and writer. She has published seven books of fiction in Spanish, three of which have been selected by the International Board on Books for Young People for their high quality. In 2014, she was awarded the Premio Literario Lipp La brasserie for her novel Tal vez vuelvan los pájaros. Born in Havana, Cuba, in 1967, she has lived in Mexico since 1973.

Cecilia Weddell is a writer, editor, and translator. She has a Ph.D. in Editorial Studies from Boston University, where she translated the newspaper essays of Rosario Castellanos and earned a graduate certificate in Latin American Studies. Her translations from Spanish have been published in journals including World Literature Today, Latin American Literature Today, and Literary Imagination. An associate editor at Harvard Review, she is from El Paso, TX.