New Releases: Bonnie’s Rocket, How We Can Live, and Marvelous Mabel 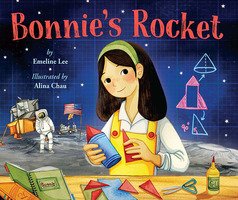 We are thrilled to share that we have not one, not two, but three new releases today: Bonnie’s Rocket by Emeline Lee, illustrated by Alina Chau, How We Can Live: Principles of Black Lives Matter by Laleña Garcia, illustrated by Caryn Davidson, and Marvelous Mabel: Figure Skating Superstar by Crystal Hubbard, illustrated by Alleanna Harris!

As Bonnie’s father works on the Lunar Module for the Apollo 11 mission, Bonnie is building her own model rocket . . . but will it ever fly? Inspired by the experiences of the author’s grandfather, Bonnie’s Rocket celebrates the diverse team that contributed to one of the United States’s greatest achievements.

Bonnie’s father is an engineer for the Apollo 11 space mission. Bonnie is an engineer too, developing a model rocket that she plans to shoot high into the sky. While Baba works on the moon-landing module far away, Bonnie designs, builds, and tests her own project — with sometimes disastrous results! Throughout the process, Baba’s letters encourage her in her work, and after the astronauts return from the moon, Baba comes home in time to see Bonnie launch her amazing rocket.

Inspired by the experiences of the author’s grandfather, who helped design the space suits and life-support systems on the Apollo 11 lunar module, Bonnie’s Rocket celebrates the diverse team that contributed to one of the United States’s greatest achievements. It’s also a heartwarming father-daughter story and a terrific gift for budding engineers and space fans of all ages.

or through your favorite AAPI-owned bookshop!

Emeline Lee grew up hearing stories about her grandfather’s work on the Apollo 11 moon landing, which inspired her own fascination with science. She studied English literature and environmental sustainability at Columbia University, and she now works in the renewable energy sector in New York City. This is her first picture book. Find her on the web at emelinelee.com and follow her on social media at @EmelineLeeBooks.

Alina Chau dreamed of being an astronaut when she grew up, but instead went on to a career as an award-winning artist and filmmaker. She illustrated The Nian Monster, which received the 2018 APALA Picture Book Honor, alongside many other beautiful picture books. Her animation credits including Star Wars: The Clone Wars and numerous best-selling games. She lives in southern California. Visit her website at alinachau.com and find her on Instagram at @alinachau.

How We Can Live: Principles of Black Lives Matter by Laleña Garcia, illustrated by Caryn Davidson

When the Black Lives Matter movement began in 2013, the three founders—Alicia Garza, Patrisse Cullors, and Ayọ Tometi—anchored its work in a list of guiding principles, developed through conversation with other activists. These principles commit the movement to empathy, loving engagement, and just action among its participants; affirm the importance of Black women, families, elders, and LGBTQ folk; and celebrate the strength and diversity of Black people in their communities and around the globe.

Now young people can explore these powerful principles in How We Can Live: Principles of Black Lives Matter—the first children’s book to include material from the founders’ organization, the Black Lives Matter Global Network Foundation. Created by two teachers with more than thirty-five years of educational experience between them, How We Can Live presents the guiding principles in down-to-earth, child-friendly language, accompanied by vibrant portraits of real people—many of them present-day or historical activists for human rights and racial justice. Questions on every spread encourage discussion of and reflection on the principles, and supporting materials include an introduction for children that explains the history of the movement and its relevance for their lives, and an afterword for adults on how to approach the topic with children. An essential resource for anyone discussing racial equity with young people, How We Can Live offers a beautiful and inspiring lens on the most important social justice movement of our time.

Praise for How We Can Live:

“An important message for all young people, this is approachable but profound in its message, and a welcome addition to any elementary library.” —School Library Journal, starred review

. . . or from your favorite Black-owned bookshop!

Laleña Garcia has been teaching children in New York City since 2000, and educators across the country since 2017. HOW WE CAN LIVE grew out of her work with Black Lives Matter at School, a coalition of educators and parents striving for racial justice in education. A graduate of Yale University and Bank Street College of Education, she lives in Brooklyn. Please visit her website at rootedkids.org and follow her on Instagram at @blm_in_kindergarten.

Caryn Davidson studied Anthropology and Visual Art at Brown University and received her MA in Arts Education from NYU. Since the start of her career in education in 2004, she has founded and developed the arts programs at three public schools in New York City, and led initiatives to promote culturally relevant pedagogy and socially just practices within those school communities. She now teaches art at the high school level in Brooklyn, NY, where she also lives. She is a Steering Committee member of the Black Lives Matter at NYC Schools organizing group and a designer for the national Black Lives Matter at Schools movement. Please visit her website at caryndavidson.com and on Instagram at @caryn_arts.

Meet Mabel Fairbanks, the skating superstar who became the first Black athlete inducted into the US Figure Skating Hall of Fame.

After watching ice skaters glide and spin at a rink in Central Park, Mabel Fairbanks was determined to learn to skate. But in the 1930s, many places didn’t allow Black skaters on the ice, so Mabel practiced on a homemade rink in her bedroom! There she learned how to perform sharp turns and whizzing spins of her own creation.

It wasn’t long before Mabel needed more room to practice skating, and she returned to one of the rinks that denied her entrance. This time she refused to take no for an answer. She knew that if they just let her on the ice, she would be the most marvelous skater anyone had ever seen. And she was right, as her trailblazing talent continues to influence the sport today.

Written and illustrated with warmth and spirit, this is the true story of how Mabel Fairbanks’s determination and grit led her to become America’s first Black skating superstar.

“Fans of the Winter Olympics, strong female characters, and underdog stories will flock to this title.” —Booklist

“An account of a sports pioneer that should be widely read and shared.” —Kirkus Reviews

“Perseverance lies at the center of this affecting biography.” —Publishers Weekly

“Every twist and turn is captured and the movement is dynamic in this book; a pleasure to read and to share.” —School Library Journal

. . . or from your favorite Black-owned bookshop!

Crystal Hubbard is a sports buff and full-time writer. Her children’s books have received honors such as Bank Street College’s Best Children’s Books of the Year and ALA’s Amelia Bloomer Project. Hubbard lives in Missouri with her husband and their four children.

Alleanna Harris is a children’s book illustrator and artist who finds inspiration in the beauty of everyday things. As a kid, she would doodle on notebooks in school and on programs in church. She graduated from the University of the Arts with a BFA in animation with honors. Harris lives in New Jersey. Find out more about her at alleannaharris.com.