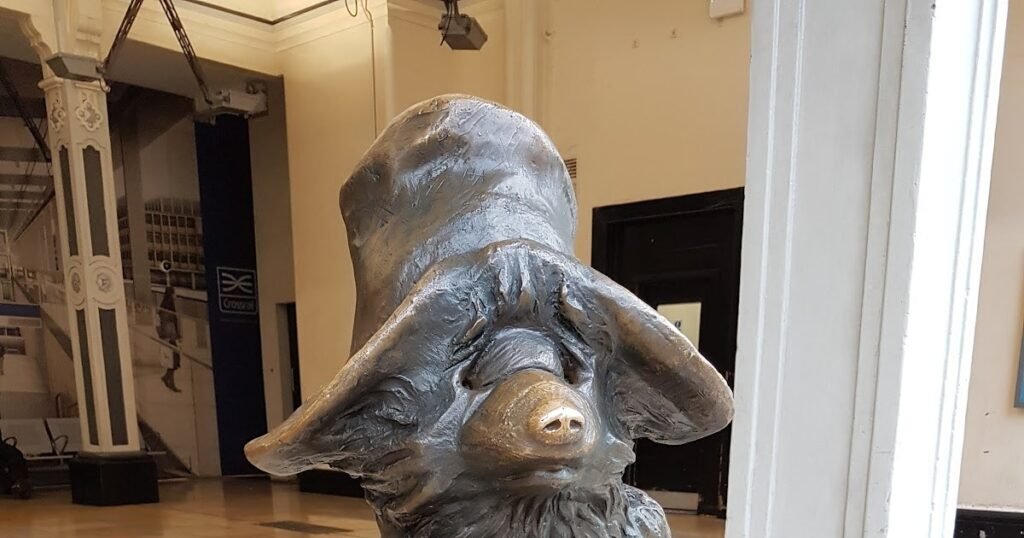 The Kids’ Book Review Bookish Places posts are a chance to celebrate museums, galleries and other places with a connection to children’s literature and reading. The posts are compiled by KBR’s Consultant Librarian, Sarah Steed, our intrepid traveller and hunter-gatherer of amazing places!

Paddington Bear is the much loved star of the children’s books written by Michael Bond, which were first published in 1958. In the story A Bear Called Paddington, he is given his name by the Brown family who met him on the platform at Paddington Station soon after his arrival from deepest, darkest Peru.

London’s Paddington Station celebrates its famous namesake with a bronze statue of Paddington Bear on Platform 1, where he has a fine view of the trains. The statue was designed by British sculptor, Marcus Cornish, based on the original Paddington illustrations by Peggy Fortnum.

And best of all, you don’t need a ticket if you just want to visit the Paddington statue.

Also at the station is the Paddington Bear Shop (the only one in the world). There you can browse and purchase all kinds of Paddington items including books, bears, toys, gifts and exclusive Paddington items. There’s also an online store for those who can’t make it in person.

If you’re visiting London, you can follow the Pawprint Trail to see the Paddington Bear Book Bench, a statue of writer Michael Bond, places that feature in the Paddington stories and more.

Paddington Railway Station is located on Praed Street, Paddington, in London, England. It’s a major station with trains serving many regions as well as Heathrow Airport. Trains on several of the London Underground lines also stop at Paddington.

Paddington Bear can be enjoyed in many ways, and whether or not you visit Paddington Station, you can join him on his adventures by reading a copy of a Paddington book.

Interested in taking a Bookish Places trip around the world with Sarah? Enjoy this sensational map, also created by Sarah, and check out our other Bookish Places posts here.

PrevPrevious PostTHE GRAY ROCK METHOD OF DEALING WITH NARCISSISTS, SOCIOPATHS and PSYCHOPATHS
Next PostWHY DOES IT TAKE SO LONG TO GET OVER A NARCISSIST OR PSYCHOPATH?Next