Sanctuary for the Abused: BLAMING THE VICTIM 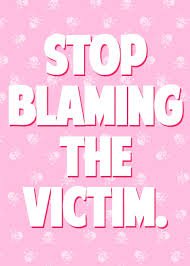 The first thing the victims of narcissists need to know is that they are not to blame.

In other words, he didn’t get mad because dinner was was late. She didn’t blow up because you are “too this” or “too that.” You didn’t “ask for it” by speaking up and saying that you deserved some attention and respect.

The narcissist attacked you just because you are there, period. Don’t you have a right to be there?

Let’s get real. Narcissists think they have a right to punish you just for being the way you are. Think, don’t you have the right to be the way you are? Do you have to be some character in the narcissist’s fiction that conforms to his or her specifications?

Does that make any sense? That’s as hateful as the crime against humanity of attacking people just for being a certain KIND or nationality.

The narcissist attacks because he or she is a predator, period. Predators attack any vulnerable prey that crosses their sights, period. Therefore, the prey is NEVER the one bit to blame.

It would make as much sense to blame a sheep for getting attacked by a wolf. So what if the wolf says, “I attacked her because she is an obnoxious sheep!” What idiot falls for that line? Yet narcissist sympathizers are doing precisely this and are therefore being irrational.

The narcissist attacked just to do it, and he or she attacks any prey they have some unfair advantage over. They never pick a fair fight. They are bullies, period.

They do it to vaunt themselves on others. It gives them a high. Like as in a high from a hit on drug.

You are like a bank teller who gets shot in a holdup. You are totally innocent of getting shot. Don’t let the sloppy thinkers like narcissists and their sympathizers convince you that you are to blame because you were rude, or because you were embezzling, or because you are a drug addict. All that is irrelevant TO HIM SHOOTING YOU.

Of course you should change those things about yourself, but the “intellectual” clowns who make out your character flaws as justifying abuse of you are complete idiots unable to see the relationship between cause and effect.

I don’t care how “threatened” any of that makes the poor, twisted narcissist feel. His perverted feelings are HIS problem, not yours. The Narcissist will never run out of twisted excuses to irrationalize his attacks on you, so get off the guilt trip. His perversity is not YOUR vice.


Narcissists attack you just to do it. You are therefore 100% innocent of your victimization. Blow off this absurd “It takes two to Tango” crap.

Doubtless, you will discover that there are certain things you should stop doing. Good. Now you wise up and stop being manipulated in ways that play right into the narcissist’s hands. Now you cannot be victimized.

THIS is how you stop being a victim.

But foggy-headed idiots (like those espousing the ridiculous co-dependence theory) try to claim that you stop being a victim by pretending that you have never been made one. That’s crazy.

That is magical thinking, like the narcissist’s. You HAVE been made a victim. That’s a FACT, like it or not. And “victim” is not a dirty word. Though being a victim is nothing to aspire to and is something to avoid, being a victim is NOT a sin. It is nothing to be ashamed of. To the contrary, the most innocent are the most unsuspecting and most easily victimized … until they have learned the hard way not to assume that other people are good. And these foggy-headed idiots who blame the victim should be able to see that. (Maybe if they stopped thinking in buzzword-laden slogans, like robots, they would.)

You stop being a victim by wising up so that you are never again victimized. It requires nothing beyond COMMON SENSE to realize that.

In some cases, the narcissist has stolen something of value from you, like your job or reputation – something you have every right to get back from the damned thief. You stop being a victim when you win justice and get it back, period.

PrevPrevious PostKids’ Book Review: Review: Swoop
Next PostSanctuary for the Abused: Who Gets TargetedNext