Sanctuary for the Abused: Common Traits of Stalkers 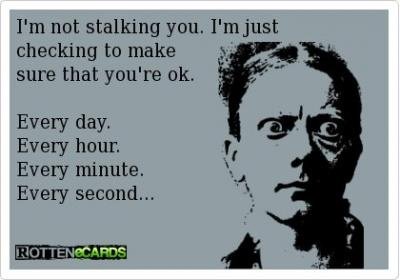 It is extremely important to be aware of the following traits of stalkers. These will alert you to the possibility that a potential suitor or even a friend or acquaintance could become a stalker.

Stalkers will not take no for an answer.

They refuse to believe that a victim is not interested in them or will not rekindle their relationship and often believe that the victim really does love them, but just doesn’t know it and needs to be pushed into realizing it. As long as they continue pursuing their victim, the stalker can convince themselves they haven’t been completely rejected yet.

Stalker often accuse their victims of stalking them or others.

They are not just interested in, but totally obsessed with the person they are pursuing. Their every waking thought centers on the victim, and every plan the stalker has for the future involves the victim. Ask yourself this. Is the person totally involved in and completely overwhelmed with pursuing someone who has no and never will have any interest in him or her?

Along with obsessive thinking, they also display other psychological or personality problems and disorders. They may suffer from erotomania, paranoia, schizophrenia, and delusional thinking. According to Professor R. Meloy, “these stalkers have rigid personalities and maladaptive styles. These disorders in themselves are very stable and not treatable.” There are drugs to treat certain specific mental disorders, but stalkers, when given the choice, seldom continue with their medication or treatment.

Stalkers are above average in intelligence and are usually smarter than the run of the mill person with mental problems.

Most stalkers don’t have many relationships outside the one they are trying to re-establish or the one they have imagined exists between them and their victim.

Stalkers don’t display the discomfort or anxiety that people should naturally feel in certain situations.

Normal individuals would be extremely embarrassed to be caught following other people, going through their trash looking for information about them, leaving obscene notes, and other inappropriate behavior displayed by stalkers. Stalkers, however, don’t see this as inappropriate behavior, but only as a means to gain the person’s love.

Stalkers often suffer from low self-esteem, and feel they must have a relationship with the victim in order to have any self worth.

Preoccupations with other people almost always involve someone with weak social skills and low self-esteem.

Few stalkers can see how their actions are hurting others.

They display other sociopathic thinking in that they cannot learn from experience, and they don’t believe society’s rules apply to them. Most stalkers don’t think they’re really threatening, intimidating, or even stalking someone else. They think they’re simply trying to show the victims that they’re the right one for them. To the victims of stalking it is like a prolonged rape.

Stalkers, like rapists, want absolute control over their victims. They don’t regard what they’re doing as a crime, or even wrong. To them it is true love, with the exception that the victim doesn’t recognize it yet. With enough persistence, stalkers believe they will eventually convince the victims of their love.

Stalkers many times have a mean streak and will become violent when frustrated. How violent? Often deadly.

The above traits remind us that much of stalking involves harassment and annoyance, but never forget that stalkers can also be extraordinarily dangerous. Believing that their victims love and care for them, stalkers can become violent when frustrated in their quest for this love.

Although the majority of cases do not end in murder or grave bodily injury, enough do every year that victims should never brush aside the possibility. Victims of stalking should never take the crime lightly, no matter who the stalkers are or how close they have been emotionally.

Look carefully again at the traits below and be wary if someone seems to fit these: