Sanctuary for the Abused: INVALIDATION 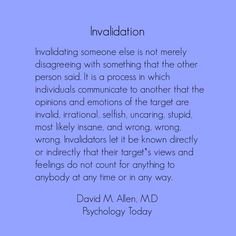 Invalidation denies the importance of your experiences, your feelings, your thoughts, your wisdom, and even your existence.

Invalidation. It takes many forms, but the person doing it is always communicating the same thing — your needs don’t matter!

A father’s 3-year old son has gotten hurt skinning his knee on the sidewalk, and the father instantly pulls his bawling child up by the hand, exclaiming, “It’s not bad, you’re not hurt, what are you crying for? Look, it’s only a scrape, get up!”

But his son IS hurt, twice — once, physically, by falling, and again, by being denied his legitimate feelings by his father, the person whose job it is to teach him that his feelings always matter. Later in life, when the child becomes a man and marries a woman whose expectations of him are unreasonable and who calls him a baby if he complains, it is a reflection of his father’s bad parenting.

Children’s – and everyone’s – feelings are always legitimate. The feelings may be difficult to fully understand, however, if enough listening is done instead of merely trying to stuff down the unwanted feelings, the reasons make themselves known and can be addressed and healed, not just hidden.

Invalidation often takes the form of being told that you should not feel as strongly as you do. Other times, you’ll be told that your concerns are nothing to worry about. Some common invalidating statements are:

“What are you crying about?”

Your wishes may also be ignored in favor of the other person’s preferences. You may feel as if you don’t have an equal voice in the relationship or in what takes place. When you explain that being ignored makes you unhappy, you’ll be made to feel as if your concerns aren’t legitimate, and you should be ashamed of yourself for making life difficult for the invalidator.

Getting invalidators to truly hear you out isn’t easy, and in many cases, is impossible. If nothing else, remember that your feelings – no matter what they are – always have a legitimate reason, and are there for a real and important purpose. You may experience invalidation by someone else, but you can practice what mentally healthy people do all the time – know that all feelings always matter, even when some people don’t understand them, and always, always… validate yourself.